This site uses cookies, so that our service can work better. Learn more I understand

The team has existed since 1979. He has performed hundreds of performances in Poland and abroad, he is a laureate of many important competitions such as "Festival of Song and Dance in Konin" or "New Song in Old Krakow".
The Artistic Group "STONOGA" specializes in dance shows. Choreographies are created to songs written especially for the band. The themes and the degree of difficulty of the pieces are adapted to the age of the performers who practice in different age groups.
The ensemble regularly takes part in competitions and festivals, and at the end of each season presents its achievements on the stage of the Łódź Philharmonic.
The Artistic Group "STONOGA" invites children from the age of 4 who want to develop their dancing and vocal skills to play together. Classes are held in a room with mirrors and an exercise rail.
The team is led by the irreplaceable, one-of-a-kind Marta Świątecka! 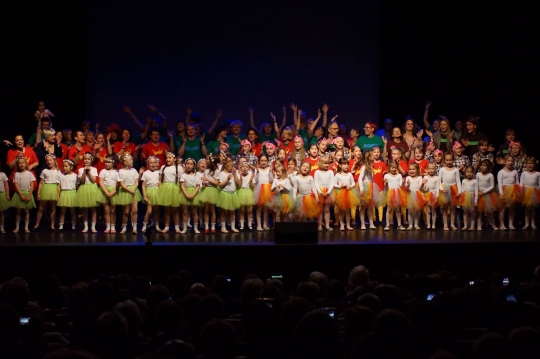 Children like to dance very much, and they take up many games combined with movement and dance spontaneously, so these reactions should be developed from the first years of life. Dancing is a natural phenomenon that increases the level of endorphins, i.e. "pleasure compounds" in the blood, and the pleasure derived from movement to music increases the child's natural joy. Just communing with music creates a mood of satisfaction, and dancing to music intensifies this joy.
Movement games and dancing to the rhythm of music are conducive to the development of comprehensive physical fitness in children of all ages. Children get rid of complexes, inhibitions, open up to the world, are spontaneous and find their place in the peer group.
Dance shapes positive character traits such as: patience, perseverance, courage, resistance to hardship and fatigue. The child acquires the skills of cooperation in a group, acceptance of himself and others, searching for and overcoming the barriers of his abilities. In addition, dance develops memory, thinking, perceptiveness, attention, orientation, imagination and creative intelligence. Dance games and dances also train and improve perceptiveness, reflexes, eye-hand coordination, orientation and spatial imagination, shape conscious movement, breath, teach decision-making, introduce order and order.
In dance, the child spontaneously reacts to the elements of music with movement, in the form of various steps and figures, and the presence of background music reduces the effects of physical fatigue. Dance shapes the precision of movements and improves their coordination, gives the child's movements lightness, elasticity, flexibility, fluidity and jumpiness. The child's body posture undergoes positive changes, because taking care of the aesthetics and elegance of movements, it is required from him to "straight" back, pull back the shoulder blades and raise the head. Dance prevents posture defects and has a positive effect on their correction.